It’s been a busy Saturday around here for us, especially since it started out with a run which of course wipes me out for the rest of the day!  Yesterday evening we picked up our friend Meriwether from the train station who is back with us for 6 days before continuing the rest of her European adventures.  We went out with all the children to Buca di Beppo – an Italian restaurant from America of which there are about 8 in the whole United Kingdom, and which I just discovered last week is about five miles from our house!!  We had a great dinner which was proclaimed “the best dinner ever” by my seven year old son (who also said that when we ate at the TGI Fridays an hour from our house about a month ago – do you think they miss American food??)  I was SO FULL all night and uncomfortable until I managed to fall asleep at some point.  After about 8 hours of sleep, punctuated by three trips to the pottie because we all know pregnant ladies have to go pottie all night long – probably to get us ready for the upcoming sleepless nights with baby – I woke up refreshed enough for a run, with my tummy feeling a bit smaller than it had after all that Italian food 🙂

I have been having some Braxton-Hicks contractions, even in the morning sometimes, so I wasn’t sure if perhaps my last run on Tuesday had been my last.  Figured I might as well give it a shot!  After feeling a bit rough for the first half mile I was able to pick it up (even to go as fast as 10:30 pace – fast for me at this point in the pregnancy) and enjoyed the run for the most part.  As the baby continues to drop, each day and during each run I can feel how different my body is, so every run feels like it’s working my muscles/tendons/joints/ligaments in a new way, leading to new soreness (less mobility) later on in the day.  But, I’m going to attempt to keep at it – just taking it one run at a time!

I calculate at this point that if I still run three times a week until I deliver, then that’s 6, at the most 7, more runs to go.  I’m getting there!  This is the point in every pregnancy at which, after moaning and complaining about being pregnant for so long and wanting it to be over, I start to dread the end.  So many “hard” things to anticipate since I’ve done it five times before, where maybe if it’s your first pregnancy, or your first delivery that you’re planning to do a certain way, or your first time to feed your baby in a certain way you may be anticipating the unknown with some excitement.  For me, the future coming up in the next three weeks is a pretty well known event, and the only things that might really alter it in some way are things that would only make it harder.  So at its BEST, I know I’ve got a lot of pain and hard work in front of me pretty soon, followed by a lot of nights with little sleep and lots of new demands on my body.  Sounds like I’m complaining about the miracle of birth and blessing of a new, healthy child you are able to nurse, but I’m not.  I’m not complaining saying, “I don’t like this” – I’m just saying that I know there is a tough time coming up, combined with road trips to get the circumcision (since it’s not done here except for health reasons so we need to go to the closest US base with a clinic) and to get the passport/SSN stuff done, all happening in the midst of packing out for an international move (for which we don’t even have orders yet, and he finishes his course here July 15), etc, etc, etc.  I’m just wanting time to slow down a bit now….never can make me happy, right!?!?

Now the picture from today’s run – serving as the 37 week tummy shot, since I was 37 weeks yesterday: 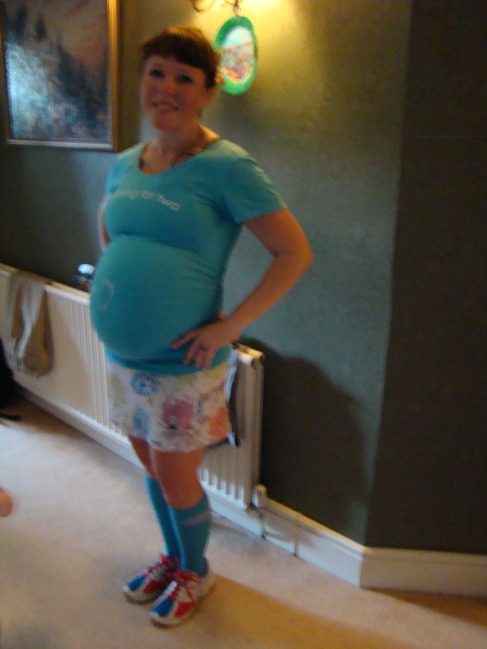 I’m very happy to report that, unlike a lot of pregnant ladies whose blogs I read, I have not been struggling with having to make frequent pottie stops in these last several weeks.  I had that “urge” from about weeks 26-34 maybe, but then I think the baby probably shifted to a position where he, oddly, does not affect my bladder much. I also think there’s not much room left in there for moving about very much, so he tends to not make a lot of huge movements anymore.  I am still able to push myself for small spurts of greater effort (i.e. increased speed, even if it’s still not very fast), but it’s such a weird feeling to have just my legs putting out this effort.  It’s almost like they are detached from my body and that I control them separately, and that my core is doing almost nothing to contribute.  It’s a different feeling for me – perhaps one that other runners feel regularly when they feel like they’re really pushing, but I have no idea.  Anyway, it’s a nice feeling when I’m out there to know that my body is still partially my own, and that it will respond to my commands occasionally 🙂

After the run I had another protein shake because I didn’t feel like eating really but knew I needed the carbs and protein.  Then we got everyone dressed and went out to a BBQ at my husband’s school put on by the North Americans (ie the Canadians and Americans) for the other students.  Meriwether commented at one point that she can see why BBQs are considered American – because the weather here is so crazy that you can’t really plan on big cookouts very easily.  Yes, it rained.  It was cold and windy, and it was sort of sunny.  So British.  And, as at every North American BBQ, there was a cricket game going on in the adjacent field (yes, you sense sarcasm.)  They did have an electric bull for the children to have bullrides, surrounded by a bouncy thing in case they fell off.  The food came from the American commissary as well – all the brands from home of hot dogs, buns, chips (crisps as they call them here), and condiments, and then, of course, watermelon 🙂  Once it was clear that we were no longer enjoying ourselves because of the rain, our family packed up and left.  We had come in two cars because John needed to be there early to help, so Meriwether and I travelled to nearby Marlborough for High Tea and a little grocery shopping while John took the children home (via a pitstop at Toys R Us).  Just finishing up a few hours on the couch with my feet up now, and then John and I are going out on a date for a movie.  This is the most I’ve done all in the same day (with the exception of just being out the whole day like at the Races) in probably a month, and I am feeling it!! At least the last leg of the day is just sitting in a seat at the movies 🙂 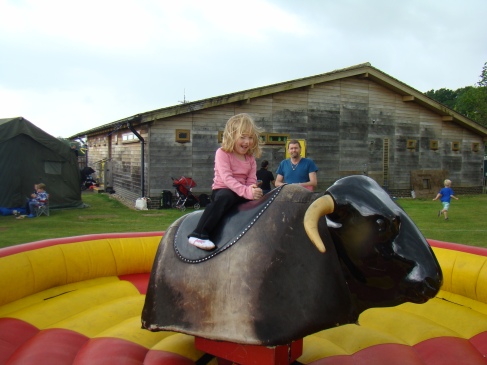 That’s a guy properly attired for cricket – complete with sweater vest for if [when] it gets chilly and wet.

Hope you have a nice Saturday!

One thought on “Saturday’s Run and Weekly PREGNANCY Recap :)”