Thursday afternoon here in England, and it is sunny and bright and warm in our house!  Wow!   My almost-two-year old is attempting to sit on a Polly Pocket chair (the chair is about…1 1/2 inches high, so she is not succeeding.)  She was up at 7:30 this morning again, and Meriwether left earlier this morning, so I was up with her and then took a nap after lunch from which I awoke much more chipper than I was previous to naptime 🙂  I have nothing running-related to talk about today but was put in mind of making a list for post-pregnancy perks by reading someone else’s blog a few weeks ago.  So I guess a lot of things on the list will be about running, though, because un-pregnant running is definitely high on the list!! 🙂

TOP TEN THINGS I LOOK FORWARD TO AFTER MY DUE DATE

(in no particular order)

2. Having the desire and ability to play the bagpipes again!

3. Being able to easily put on compression socks and running shoes!

4. Being able to eat and enjoy food more easily without worrying about indigestion and heartburn.

5. Having the physical stamina and ability to do normal things around the house and with my children.

6. Wearing regular clothes – in smaller and smaller sizes over the coming months.

7. Not being as overcome with emotions (this one won’t apply til about a month after delivery, but still, it’s coming!!)

8. Being able to push myself while running, and enjoying the feeling of a faster pace and getting hot and sweaty!

9. Eventually sleeping through the night (in a few months this one will just be so awesome!! No more getting up to go pottie at night and then sometime soon the baby sleeping all night, too!)

So this week while Meriwether was here we made the last thing I wanted to put up in the freezer for when the baby comes — pizzas!!  I wanted to make more bread but don’t have the room in the freezer right now (believe me, getting the pizzas in was hard work!!) so I may actually have to exert myself to bake one more time after the baby comes and before our movers take everything away 🙂  The recipe for the crust will follow, but just realize that this made a LOT of pizzas, so unless you want to freeze a bunch, you should cut it in half.

We soaked the flour the night before, this time in water with some apple cider vinegar instead of in buttermilk like I do with the sandwich bread.  I also put in the honey and olive oil for the recipe.  The last time I made this dough it was too sticky, and I was wary of adding much additional flour because too much of that can change the taste and texture in unexpected ways.  I mentioned this in a previous post, but I think the moisture content of the wheat berries I bought in England is higher than what I’m used to in the states, so you need to cut the liquid amounts to get a dough just right.  However, in this case, I decided to just add some hard red (from the U.S.) to my hard white to cause it to act a little more like regular dough.  Normally, this recipe had been perfect with some Soft White wheat berries added in — I mean perfect, as in, puffing up a bit and tasting like real pizza crust and not too bread-y.  That’s the way I’ll be writing out the recipe, but you will notice that my dough looks a bit reddish, and that’s because of the hard red wheat berries I included.

This is how it looked in the morning after the soak.

This is the soaked flour mixture being stirred together with the additional flour for the recipe and the salt, and one teaspoon of honey.  Any flour I add after the soaking is always just all purpose flour because I think un-soaked whole grains are not good for you.

Here’s the proof for the yeast.  I barely had enough yeast and was excited to find a strip of three packs in the cupboard to add to it.

When you add in the yeast mixture and combine, you just mix it til it is all incorporated and is starting to form a ball.  It will not clean the sides of your bowl like bread recipes do.  I tried to get a picture of what the “ball” looked like in this case.  I added maybe half a cup of additional flour to get it to this consistency, but again, be careful of adding too much additional flour.  At this point you let the dough rest for 20 minutes.  Then turn on your mixer again for about 30 seconds, and let it rest again for 20 more minutes.  After the second rest, knead for about 5 minutes in the mixer.  Then place it in a well-oiled bowl and oil the top of the dough (You can try to turn the dough over in the bowl once, or you can use a brush to brush on oil or a mister.)  Allow to rise to 1 1/2 times its size.

Here’s  a lovely picture of the dough after it’s risen for about an hour.

After the rise you punch it down and allow it to rise again to 1 1/2 times its size.  This second rise can be skipped if you are in a hurry, but the dough will be an easier texture for making into crusts if you do the second rise.

Here I am forming the crusts.  The dough looks pretty nice at this point (punched down again after the second rise,) but I was too scared from the last pizza experience here to turn it out onto a floured counter.  Instead I oiled my hands and just grabbed balls of it from the bowl.  Also, the last time I ended up using so much flour when trying to get it off the counter that the bottom of the crust ended up floury which was not the best flavor.   Previous pizza crust recipes have had me putting the balls of dough onto the counter and rolling them into discs using a rolling pin.  This recipe says to take a ball in your hands and to flatten it, and then let it start to leak out the bottom of your hands, rotating it the whole time so it stretches out into a sort of disc shape, and then putting it onto your cornmeal-covered surface to finish out the stretching. 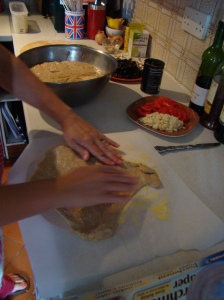 Under the parchment paper is a pizza peel (round wooden board with a handle on it.)  I preheat my oven with a pizza stone inside of it and then transfer the crust to the stone while it’s still on the parchment paper.  This dough is just too sticky to not use the paper (in my experience.)   Be careful when spreading it out not to spread it too thin.  If you make too many holes in it, just ball it back up and start over 🙂

Here is one ready to go into the oven.  Be sure to poke it with a fork all over before baking so that you won’t get too many air bubbles 🙂

I parbake the crust for about 3 minutes at 450 or 500 F, however hot your oven will get.  The ones that are going in the freezer get the toppings and then are wrapped up.  The others I top and then bake right away 🙂  Usually the pieces don’t even make it to my plate before I eat them!

Two par-baked crusts, one with some sauce on it ready for a few more toppings.

While we were waiting on the dough’s risings and such we chopped up some veggies for our toppings:

Lots of garlic is always a must!  We layer on sauce, then garlic and Italian seasonings, then pepperoni, olives, and mushrooms.  We don’t put on the tomatoes til the pizzas come out of the oven.  We made three regular-sized pizzas that we ate for dinner, then a bunch of small ones for our inadequate freezers 🙂 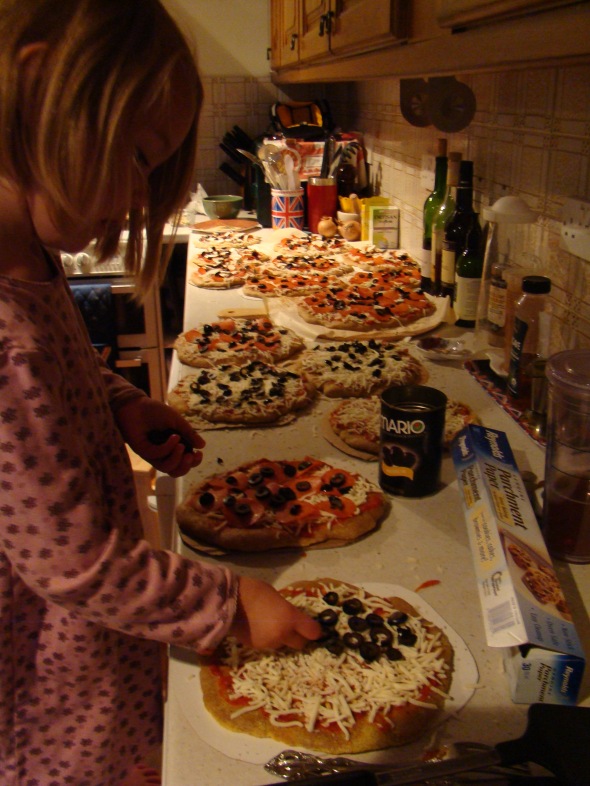 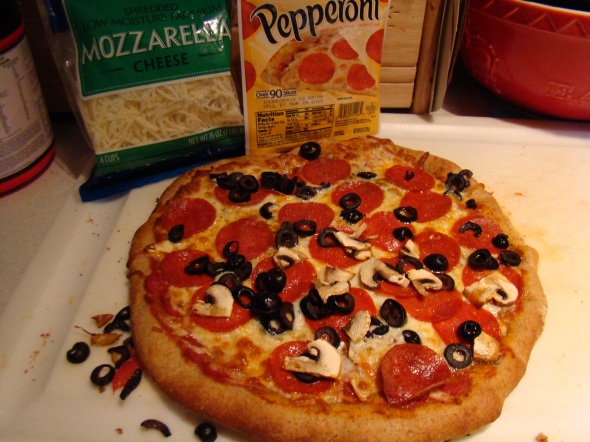 This one just out of the oven is really making me want pizza again already!

The next day, start with the proofing of the yeast:

Mix together well in the mixer:

Next add – The Proof

Once it is well mixed, if it is too sticky add more flour a TBSP at a time – give all the fresh wheat time to soak up the liquid, though.  The sides don’t have to be clean, and the dough should be sticky, but staying together in a ball-ish.

THEN TURN THE MIXER ON FOR ANOTHER 30 SECONDS OR SO.

LET THE DOUGH REST ANOTHER 20 MINUTES.

THEN KNEAD THE DOUGH ABOUT 5 MINUTES.  You can knead it in the mixer and check it along the way – You want it to stay hydrated, and it doesn’t need to support a rise, so it doesn’t need extensive kneading.  Knead til it is cohesive and springy, like an elastic, but somewhat sticky.  If it seems resistant but too sticky, let it rest 3-4 minutes, and then begin the kneading again.

AFTER KNEADING, OIL A BIG BOWL AND PUT DOUGH INTO IT IN A LOOSE BALL.  TURN IT OVER IN THE BOWL ONCE TO OIL IT.  Leave in a warm place to RISE TO ABOUT 1 ½ TIMES ITS SIZE, ABOUT 45 MINUTES.

PUNCH DOWN AND FOLD IN A FEW TIMES, REOIL, AND RISE AGAIN TO 1 ½ TMES, ABOUT 25 MINUTES THIS TIME. (You can skip this rise if necessary.)

Preheat, with pizza stone, to as hot as the oven can go – 500 or 550. Put out parchment paper on a board or pizza peel, and sprinkle cornmeal on it.  Oil your hands and take a ball of dough from the bowl.  Pat it into a rough circle.  Pick up by the edges and rotate, letting the weight of the dough stretch it out to the right size.  Place onto the parchment, and continue to stretch it if necessary, and then POKE WITH A FORK and “par-bake” 2-3 minutes.  You can oil the edges before par-baking, or oil the whole thing after par-baking and before topping it.  Once it is topped, bake 7-9 minutes, or until the cheese starts to brown a little.

2 thoughts on “Pizza Mania!! and some things I’m looking forward to…”