(and track me, and cheer me, and hear from me, and call me…) TECHNOLOGY sometimes just really impresses me.  For the Marine Corps Marathon this year, as with every previous year for the last decade probably, advances with social networking and smartphones continue to make being a runner or a spectator for this epic event even more enjoyable and simple (not that running 26.2 miles or supporting a participant could ever be called simple).  If you are one of my personal friends or family members and have any desire to keep up with me during the marathon on October 28, then you can sign up through some things that I will mention here.  If you are a stranger to me other than being an avid reader about the All-Armstrong-All-the-Time going on over at our house, then you probably have better things to do with your time besides cheering me on during a marathon (maybe you are running the MCM that day, or another marathon, or are supporting another runner, or are just doing a nice long run that day, or – as we would otherwise be – you might be at church!), but I will have it set up to broadcast automatically to Facebook when I pass certain points, and any additional cheers from ANYONE will be not only welcome, but coveted!  I would love to hear from anyone who is sharing in this experience with me – be it through attending the race that day or electronic means – because I have a feeling I will need all the help I can get!!  You may wonder why I’m so excited about the MCM, why someone would pay money for this kind of torture!  Well, in today’s post I will tell you why I am running the MCM on October 28, 2012, in our nation’s capital.

Here’s a page of “testimonials” from the MCM website.  Tell me it doesn’t motivate you, too:

Anyone who knows me is aware that I am a United States Naval Academy graduate, class of 1998.  (My husband was class of 2000.)  On September 11, 2001, two friends of mine were killed at the Pentagon – LT Darin Pontell, who was a company-mate and a classmate at USNA, and LT Jonas Panik, USNA Class of 1997, who was on the Powerlifting Team with me.  I am running the MCM with a group from USNA called “Run to Honor” which runs in memory of classmates lost on and since 9/11 in the War on Terror.  Another classmate, LT Matt Shubzda, was killed in a training accident flying F-18s in 2002.  There may have been other people who were killed in action or training over the last decade from USNA Class of 1998, but I did not personally know any others.  It is truly an honor to have a tangible way in which to contribute to keeping the memories of those who made the ultimate sacrifice in the service of this great nation at the forefront of our consciences.  When I’m having a tough time on a training run, I envision people seeing my shirt during the marathon, which says “Run to Honor” on the front with an “N*” on the back, and having them remember in their own hearts loved ones, friends, family, and strangers, who have died while serving in our country’s Armed Forces.  It always pushes me along to think that these classmates had their lives cut off, and that I still have the blessing of life, the blessing of a wonderful husband, the blessing of my beautiful children, the blessing of a loving family, so I should be living that life to the fullest, doing all the things that they will never again be able to do, and doing them in their honor.

Here are a few words from the MCM website about the course, along with a few pictures thrown in by me that I found on the web:

“The MCM start line is uniquely situated between the Pentagon and Arlington National Cemetery. The location offers a distinct reminder to runners that this is not just any marathon. Situated between those actively protecting our country and the fallen heroes, who for generations have given their lives for our freedom, runners immediately recognize the MCM’s 26.2 mile journey is about shared sacrifice. Everyone at this event has given something. The Marines and other members of the U.S. armed forces give of themselves in service to our country. The runners give themselves over to a new lifestyle, a commitment to physical fitness and a desire to achieve.”

“The USATF certified route starts in Arlington, VA on Route 110, same as in previous years, although this year, the start will be seven hundred feet closer to the Pentagon. The route winds its way through Rosslyn along Lee Highway before turning on Spout Run and the George Washington Parkway. Runners will experience a climb on Lee Highway in the first few miles of the course, but are rewarded with a descent along Spout Run and the Parkway.

After crossing Key Bridge into Georgetown, runners turn toward the Palisades Community when the course follows Canal Road, up to the reservoir and down MacArthur Boulevard.  The course guides runners down popular M Street in Georgetown. 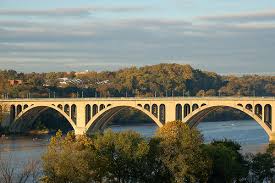 The Key Bridge across the Potomac River

Runners will turn on Wisconsin Avenue and then K Street. The course passes the Kennedy Center and guides runners to the back of the Lincoln Memorial before continuing on Ohio Drive into Hains Point at the halfway point. 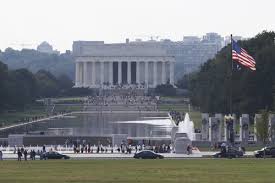 Outside Potomac Park, runners will get a glimpse of the Jefferson Memorial and Tidal Basin.  On Independence Avenue, competitors will run by the newly-unveiled Martin Luther King, Jr. National Memorial and FDR Memorial.  The runners will loop back along Independence Avenue on the side closest to the National Mall and the Korean and WWII Memorials before making a left turn onto 15th Street at the National Monument. 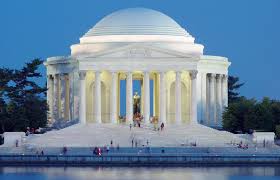 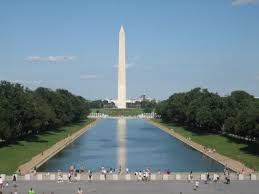 At Madison Drive, runners will pass through the MCM “Gauntlet” and down the north side of the National Mall, running by the Smithsonian Institute’s National Museum of American History and the National Gallery of Art.  After a loop around the reflecting pool in front of the U.S. Capitol, runners will continue down the south side of the National Mall past the Smithsonian Castle.  Runners move along Jefferson Drive and turn onto the 14th Street to “Beat the Bridge” at Mile 20 before returning to Virginia. 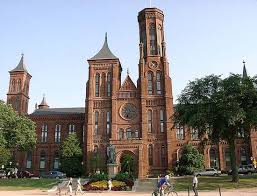 For the last 10K runners will enjoy the color and energy of Crystal City.  Finally, the course unfurls alongside the Arlington National Cemetery then offers a final, up-hill challenge to the finish at the Marine Corps War Memorial. It is truly a beautiful course.” 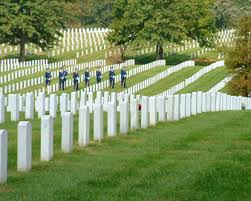 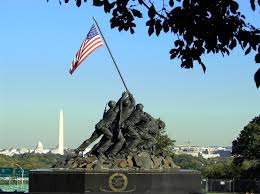 So those are just a few of the motivating (Marines always like to say words using “motivate” like motivational, motivating, motivated, along with “ooh-ra” as opposed to “hoo-ya” or “hoo-ah” like Army guys tend to do :)) sites to be seen along the route.  Did reading that get you all excited about the big day, too??  If you want to support me in some way related to getting updates from the race, go on to the MCM website, and put in your mobile number or email address.  Here is the link directly to the “social networking” part of the site:  http://www.marinemarathon.com/Community/Social_Media.htm

Another thing you can do is use the MCM Locator to find on a map where the water and food stops are, as well as mile markers and other things.  There’s a great “spectator” section on the MCM website which gives you a recommended route to follow for following a runner, including metro stops to find and bike routes in case you choose that mode of transportation.  It really does seem to be the most well organized marathon on the planet, but of course, it’s the only one with which I’ve had any experience 🙂

Let us know if you’ll be around and might be trying to find me on race day! I’ll be wearing my bluetooth headphones and running with my iphone, so you can call ANYTIME during the race, and I will be able to answer the phone and chat with you 🙂 Also, if you “like” my posted race start on Facebook through the Nike+ website, I will hear a cheering crowd through my headphones.  Heard it three times during Saturday’s 16 mile run — more than that would be wonderful 🙂  I hear the crowd carries you pretty far on the big day, but if you happen to use the tracker along with the updates of my splits to see that I’m on a lonely road, please, please, please, send me some encouragement 🙂

One thought on “Help Motivate Me for the 2012 Marine Corps Marathon!!”