Yes, it’s true, we are large family who doesn’t eat the go-to “spaghetti meal” once a week like….lots of the other large families I know.  My exposure to these people is actually pretty few and far between, though (and rather concentrated in one geographic region) so perhaps I am mistaken in thinking we are the odd-balls for not eating spaghetti once a week. 🙂  Feel free to set the record straight in the comments if you are a large family who has an opinion on spaghetti.  Either way, my reasoning is two-fold: pasta’s not really that great for you so it’s best reserved for a quick meal in a pinch, and John’s mom makes the “best spaghetti sauce ever,” so I have no desire to chase after that title.  I think I’ve said all this in my blog before.  🙂 I make one family-favorite pasta dish – bowtie chicken pasta which I blogged about the other day – and that’s enough.  Or so I thought!  A friend mentioned throwing bacon, garlic, and parmesan together over pasta (you know who you are,) and my ears immediately perked up (I mean, come on – throw those three things together over a shoe and it’d probably taste delicious!)  “We must try that,” I thought, not at all begrudgingly.  See, I’m not against pasta dishes, I just don’t really see a need for them on a regular basis. This little gem is trying to create a need in my life which it can then fill, but I am resisting the urge to make it again…and again….and again.  Fighting against the cravings, I will attempt to make this only a few times a year.  Luckily for this dish, everything in it is readily available in my kitchen pretty much any time, so it’s got that going for it, which is nice.  (random movie quote from…?) 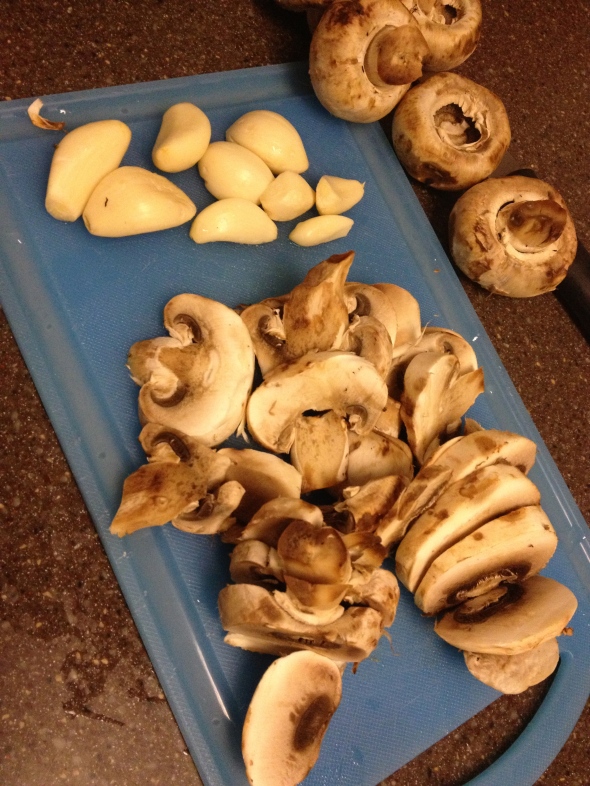 1/2 pound mushrooms, sliced (these were an afterthought and aren’t necessary)

First, cook the bacon and drain off most of the grease. Set the bacon aside to cool. [Meanwhile, get the pasta boiling.  After the pasta boils about 5 minutes, add the frozen broccoli to the pasta pot to cook it all together.  Another 5 minutes should do it, but keep checking the noodles and broccoli so neither are overcooked.]    Add a few Tbsp of butter to the pan and, once melted, soften the garlic in the butter for about 2-3 minutes.  Add the mushrooms and saute until cooked, about 5 minutes.  Cut up the bacon and return it to the pan.  Then drizzle in a bit of olive oil and heat through.  Once everything is again hot enough for a sauce, add the parmesan cheese, stirring it in til it is almost all melted.  Drain your noodles and broccoli, then return to the large pot and stir the sauce in with the noodles.  SALT AND PEPPER TO TASTE.  Voila!

boiling the noodles with the broccoli

oh yeah. mushrooms and garlic, right after I added the oil for the sauce

adding back in the bacon

getting ready to stir in the cheese!

2 thoughts on “Bacon, Garlic, and Cheese – how can you go wrong? (my OTHER pasta)”