Ahhh…taking a quick breather with a homemade PSL (What? Don’t know what that is???!!! Clearly not a Starbucks fanatic…)  Yesterday Gabriel made this creamer for me (as I read off the ingredients from the couch where I sat with my feet up) so I now have a week of Pumpkin Spice Lattes going on in Armstrong land.  We happened to have everything in the house for it (we used 1/2 & 1/2 because it was leftover from weekend cooking), and Starbucks has been calling my name since the reappearance of my favorite drink at the end of August.  I have fond memories of the Pumpkin Spice Latte John and I had right after we left the hospital in Hawaii with new baby Greer, as the newly-minted proud parents of five cuties.  I’m always a bit emotional for weeks after childbirth (it’s the hormones, people!), so that PSL moved me to tears — oh!! fall!! in Hawaii!!! (quick! light the fall-scented candles!!!)

Here are a few of the yummy things we’ve been eating (don’t worry, we’re still eating real food, too, and are not surviving solely on desserts):

mmmm…cookie dough from Against All Grain

I’ve been wanting to post about our flying leap onto the moving-faster-than-a-speeding-bullet bandwagon of being wheat-free, gluten-free, and mostly grain-free as a family.  Trouble is, I’m spending SO MUCH TIME in the kitchen experimenting with new recipes, that very little time is left for lounging.  And, I FINALLY figured out why blogging time has been so scarce of late — it has been completely subsumed by bagpiping time.  Duh.  I really crack myself up — how is it I can completely forget about my bagpiping obsession when I’m pregnant, and then it comes back again with renewed force, driving me to spend sometimes 2-3 hours a day playing the pipes!?!  No kidding, people, I have played at least two hours a day, 5-6 days a week, for the past three weeks, and I plan to continue that trend (as long as it is sustainable in our crazy house) through to the end of competition season, which is October 19.  So don’t expect to hear much from me.  I cannot WAIT to share the awesome recipes I’m finding, and especially the ones I’m creating, but for now – “The pipes, the pipes are calling, from glen to glen, and down the mountainside” (and so are my dirty clothes, dishes, and kids…)

Since May there have been a few Charleston Police Pipes and Drums gigs — playing for the local pro soccer team (the Charleston Battery), Carolina Day Parade, Fourth of July Parade in Sea Island, Georgia — as well as some Highland Games and “Band Camp.”  I entered the solo competitions at the Grandfather Mountain Highland Games (after a week at the Valle Crucis Conference Center near Boone, NC, for the North American Academy of Piping and Drumming) as well as at the Virginia Scottish Games, finally playing decently in Virginia where I received a second place for my piobaireachd.   Soon, we have the Charleston and Stone Mountain Games (near Atlanta) in September and October where our whole band will compete.  I’m looking forward to solos at both of those games and at the Scotland County (North Carolina) games in early October.   🙂 I was also honored to play for a burial at the Beaufort National Cemetery recently.  So…..lots of bagpiping going on around here, meaning EVEN MORE practicing.  Not that I’m complaining….did that sound all complain-ey?  I came in today from practicing, drenched in sweat from my head to my toes (literally), and let out a long sigh.  Someone commented that I had a pretty taxing life (referring to the fact that I’d been able to go for a run this morning, made some breakfast and cleaned a little, and then spent two hours on the pipes – while my kids did their self-paced homeschooling exercises or watched alphabet videos — i.e. I get to do a LOT of what I love!) to which I replied that I am fully aware of how awesome it is that I get to do these things, but it doesn’t change the fact that my hobbies are a bit physically taxing and require sufficient recovery time. 🙂

Marching on July 4th – pictures by my favorite roadie, John 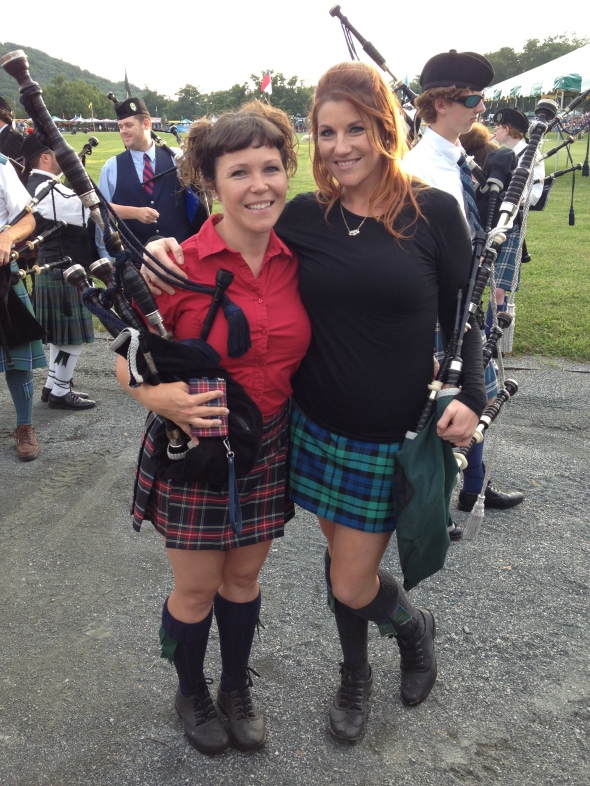 Been keeping up with the barefoot running – although I kicked a buried stump really hard with the pad of my foot a month ago, and that set me back a little.  Earlier in the summer, John and I ran the Awendaw Passage 14K, a new trail run in the area, and a friend and I just ran the Half Marathon Dirt Dash, also in the Francis Marion Forest but not quite a trail run (I had to wear Xero shoes because it was on a rocky “dirt” road.)  All for now – already waaaaay past my allotted time!!  **Incidentally, the WINNER of the Half Marathon was wearing my shirt! That’s because it was Tim Limbert, classmate of mine from the Naval Academy, who apparently teaches at The Citadel now.

After finishing the Dirt Dash

So here’s the “Half-post” for you: Sixty minutes dedicated to beginning the reasoning behind our changes, with possibly a few recipe links.  Amazing Grain-free (or just wheat-free) recipes abound on the interwebs, and on the shelves of Barnes & Noble, just shouting my name.  I want to make them all and eat them all.  Right now.  Instead, I’m just trying to cook and bake as much as I’m able while altering routine meals slightly and trying brand new things only occasionally.  I did a total pantry overhaul which took up a whole day (and keeps us from eating the stuff we’re trying to avoid) , but the menu revamping is an ongoing process.  Geez. I am SO out of time and need to get up to make our grain-free hot dog buns for dinner (It’s already 5:30!! Ahh!!!)  Guess you got a quarter post instead of a full half.  More to come….

A pantry full of nuts, with the food processor now much more accessible

[Any guesses as to the song I quoted? No cheating on google….]