Someone asked me recently about whether or not I use belly support when I’m running, and if so, what type.  So I promised to post about it.  I haven’t talked about running much since last Saturday when I ran that crazy hill.  Guess that one hill really took it out of me!! 🙂  Mostly it’s just been because we were traveling which meant I had a bunch of other stuff to talk about, but now, back to our regularly scheduled program…

Here’s a shot with my support belt on under the belly panel of my maternity skirt so that if I had to make a pit stop along the way during this 10K, it would be easier and faster to get undressed and dressed.  Normally I wear the belt over the belly panel.  The top was custom made for my by the great people at www.cyclingthings.com  (to fit me at 28 weeks) and is their American flag tri top (it was a race in Windsor where we were supposed to show our national colors.)

I did walk 5-6 miles on Monday, so I’m counting that as one workout, and I asked my babysitter to come tomorrow morning so I can hopefully get in a run Friday and then Saturday when John’s home.  We’ll see how that pans out.  I have been reading about lots of other motivating pregnant runners – apparently Inside Edition in the US did a short piece on one lady who is pregnant with her 9th child and was still running in her ninth month, and they showed her running, along with another pregnant runner/blogger who she called up to come run with her for the shoot.  Like me, they have found that most of the places they can find information and support on running through a pregnancy has been on blogs.  I know there are a few books that have been written as well (and which I have read), but it has helped me so much more to read about people’s personal experiences and to see their photos.  So inspiring!!

It seriously does take me about half an hour to get myself ready to go out for a run.  First of all there are the multiple sports bras – usually 3.  Those things are hard to get on regularly, but getting harder every time now as my body keeps growing and changing.  (They’re even harder to get off!!)  Enough about those torture devices, though.  Pregnancy has added a new one to the mix – the maternity support belt!

It still has blood stains on it from the massive amounts of chafing it caused (even with the Vaseline I used) during my half marathon at only 24 weeks pregnant.  So you can imagine how comfortable it is now!  I wear a maternity running skirt from www.runningskirts.com (I have two of them) which has a lot of material to cover my belly – a good thing for use with the maternity belt or even with a running tank that might be too short now.  I sometimes wear the huge belly part up with the maternity belt over it, and then chafing is not a problem.  Other times, when it’s too hot for my cute pregnant running shirts (a rarity in England, but it has happened once in the last month) I have worn the maternity belt against my skin with the skirt up over it, so that the belly panel on the skirt will cover what my shorter tank top would otherwise have left exposed.  It was only vanity which caused me to do it that way, though, because I just didn’t want the maternity belt peeking out from under the tank top since it’s white and would have thrown off my cuteness 🙂  The problem with wearing the belly panel up, along with the maternity belt and my shirt, is that your whole middle is swathed in fabric, which really can heat you up.  Good luck with figuring out how to keep cool – for me, the British weather is helpful 🙂

Another picture with the belt under my skirt so my shorter tank top would look cuter (vanity of vanities…):

The brand of maternity support belt I bought is Mobilis Elite Maternity Support Belt, but there are many other makers of it.  It has a rather-less-supportive-than-I-would-like panel in the front (which you first put on by using its separate elastic to hold it in place) and then a huge back brace which you velcro at the edges to the front again.  Not sure what the little strap across the top of the belly is for in this picture  http://www.physioroom.com/product.php?utm_source=googleproducts&utm_medium=foc&utm_campaign=125&pid=39162&cid=2277&affid=25&gclid=CO72msP4u7ACFSghtAodbGnlmg  because that part does nothing for me except to help me in looking more lumpy and bulgy.  Oh well, it’s not about how I look…

Here is one of the maternity athletic skirts from runningskirts.com.  The fold where it goes up onto the next stair is where the belly panel starts.  I like it that it has little velcro pockets on both sides as well.

I also have been wearing compression socks for every run since I went out without them once in early April.  I had weird pains and such in the parts of my legs the socks normally covered, and I hadn’t had them before, and haven’t had them since sticking to the socks.  This pair is from runningskirts.com but I have other pairs as well.  I have no particular favorite.

I have had to switch to another pair of Newton running shoes because my feet grew (as usual) causing the seams across a part of the top of my Terra Momentus to bother my toes.  I was able to keep the same size but with the more roomy toebox of the Gravity my tootsies are more comfortable right now.  I also have the Distance, but felt like there was a little too much pounding with those (which are my normal go-to shoes when not pregnant.)  The Terra Momentus are great for trails and were really what I needed as it started getting colder and wetter around here,  and since I was running the fields with all their holes and mud.  Once I was further along, though – around 23 weeks – the holes just freaked me out too much, and the thought of slipping in the mud, so I have stuck to the roads ever since.

To top it all off (pun intended) I love my running tees from www.fortwofitness.com .  I wish I’d gotten one of their tanks, too, but it’s too late now since I have to have it shipped to my American PO Box on a base an hour away, and we don’t make a lot of trips out there.  Who’m I kidding…I should just go order one 🙂  I LOVE the shirring on the sides and the stretch in the fabric, and they feel very light.  The one pictured here is a large because they didn’t have a medium at the time in this color, but I also wear a medium orange one, and it fits great as well.  I think you just get more length with the large, which is okay even if the length is too much for you because with the shirring it really is just as long as you want it 🙂  You should check out the For Two Fitness page if you’re into other sports, too, because they have other cute sayings on them besides just the “Running for Two.”  Here’s a shot at the half marathon at 24 weeks. 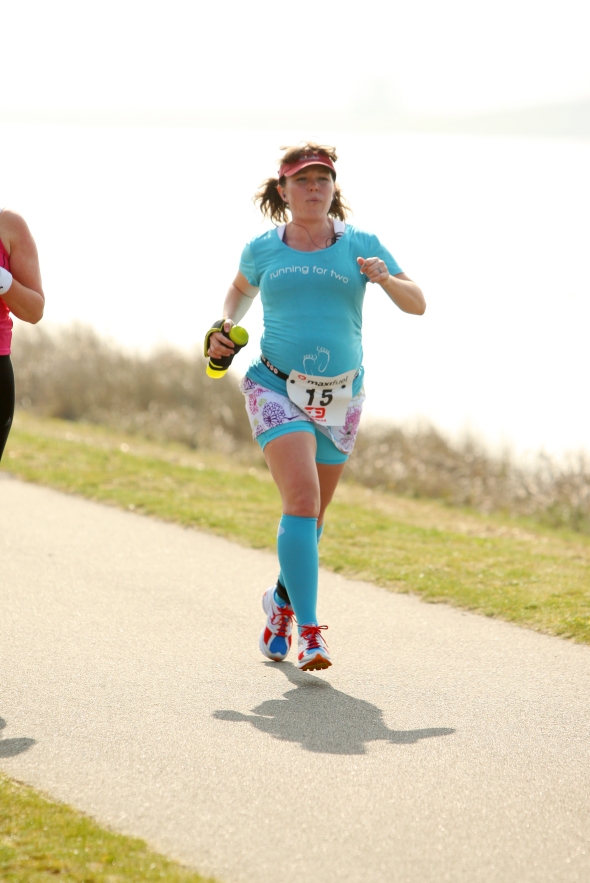 On top of putting on all these clothes, I then have to strategically place Vaseline here and there to prevent chafing – which incidentally I have discovered also helps to hold the undershorts of the skirt in place.  Unfortunately, it stains shirts because it’s greasy, but I don’t really care so long as I’m not chafing!  Hope this post has been helpful to someone out there 🙂